I have had a busy few weeks we have had the recorders conference and I finally completed the freezer!

This week one of my aims was to complete the freezer due to the fact it was so nearly done, but also because we discovered some herbarium sheets with pest damage on them. Though we suspect this was historical damage, to be on the safe side we bagged them and froze them but because there was limited space we had to freeze them in small batches. So, while I was changing over the herbarium sheets in the freezer, I finished of inventorying the freezer so that the herbarium sheets could freeze in peace.

I have been inventorying the freezer for a month or so, during that time I have ID and reordered over 420 frozen animal carcasses with a huge range in species. This information that I have collected I can now use to look at what we have and what the plan is for the specimens for example I am currently looking at our frozen barn owls and deciding which ones to keep and what they will be used for. I will do a more detailed post on the barn owl project when it is complete. But for now I am so happy the freezer is done and I have already started the Ratcliffe archive that I mentioned last week.

Tullie also received a bequeathment of an egg collection predating the time it became illegal/difficult to collect eggs (1954 it became completely illegal since 1981),which I will be curating for research purposes in the coming weeks. Egg collection are interesting as the research value they hole is very important they tell you not just the condition on the individual who laid the egg, but also of the species at that time and even environmental factors in that area. however due to legislation they can no longer be collected which is important as it protects birds to an extent,  but it does leave gaps in data and records which may be needed in the future particularly in a changing climate.

The recorders conference was this Saturday (the 10th) and it was a fantastic day, around 70 recorders attended the conference which was an all-day event that had lots of fascinating talks from all different experts.

My job leading up to the conference was mainly focused on marketing I created the posters that we used to spread the word and then worked on advertising the event on social media. The Conference was great there was some really interesting talks and it was impossible to not come away feeling inspired, a few highlights where; 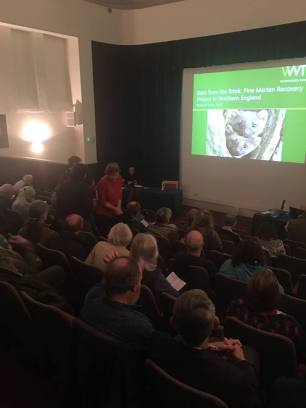 A summary of the work on the Pine Marten introduction scheme, which is a project that is happening now and they have already had some recording of pine martens in Cumbria. I also found it interesting that the lynx project was referenced as how not to handle public relation.

A talk on ‘dusking’ for moths rather than using a moth trap, particularly when targeting pug moths.

A short talk from the local Geoconservation group which was really interesting and engaging, especially the work they have on going and the projects they did with the CBDC. The women who gave the talk was so passionate it was hard not to get excited, also I do have a soft spot for limestone pavements so I was drawn in.

April also was there walking about all her work with the LOST project and with AFON, which is exiting as it’s great to see something like that grow.

Also, Simon from Tullie house talked about our contribution to the national bee project and Drigsby our whale at Tullie and how many organisations came together to bring Drigsby into the museum.

There are so many talks that I loved that day it is hard to pick just a few to mention but if you are reading this do come next year anyone with a passion for nature and wildlife would feel at home at this conference.

One thought on “Recorders Conference 2018”